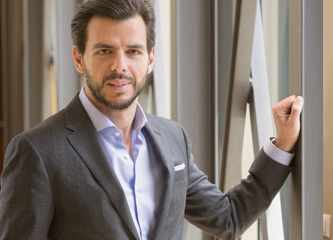 Vassili Apostolopoulos was born in Athens in 1972 and graduated from the Moraitis School. He received his BSc in Management from the London School of Economics with first class honours and his MBA from Cambridge University. He also holds a PhD in Health Economics from the University of Athens.

Dr. Apostolopoulos is President of Hellenic Alumni Association of LSE (HAALSE) and member of the Board of Directors of “Athens Club”, the most historic club in Greece.

In 2020 he was awarded the “Lifetime Achievement Award” of the British Council, given for the first time to a Greek, and in May 2021, in Monaco, he received the ‘Leadership in Healthcare & Corporate Social Responsibility Award’ at the ‘Maria Callas Monaco Gala & Awards’, which was held at the Hotel De Paris, under the patronage, and in the presence of H.S.H. Prince Albert II of Monaco.

In July 2021, the Athens Medical Group was named Gold Protagonist of the Decade 2010-2020, in the field of Medical Services, by Direction Business Network. In October 2021, Dr. Vassili Apostolopoulos received the award “World Eminent Man of Leadership in Health & Entrepreneurship” of the Who is Who International Awards for his timeless contribution to entrepreneurship, society, and health in Greece.

As of March 2020, he is the Honorary Consul of Montenegro in Thessaloniki, responsible for central Macedonia region.

He is married to Roi Danalis and is the father of four children.