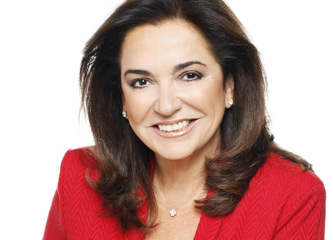 Dora Bakoyannis is a member of the Greek Parliament. She is also Chairperson of the Greek Parliamentary Delegation to the Parliamentary Assembly of the Council of Europe.
Up until the 2019 national elections, she served as Coordinator responsible for Economy and Development for Nea Demokratia.
She studied law, political sciences and communication in Munich and Athens.
She has been elected as a member of the Greek Parliament since 1989.
From 1990 to 1992 she served as Under-Secretary of State and from 1992 to 1993 as Minister for Culture in the Mitsotakis Cabinet.
She was the first female Mayor of Athens (2002-2006) and the first female Greek Foreign Minister (2006-2009), the highest post ever held by a woman in a Greek government.
In 1992, Dora Bakoyannis was awarded the International Leadership Award by the International Centre for Women. In 2005, the international organisation City Mayors elected her „World Mayor“. In 2008, Dora Bakoyannis was honoured with the Maximilian Award – European Award for Regional Policy and Local Government and in 2009 she was awarded the title of Honorary Senator by the European Academy of Human and Political Sciences in Salzburg.
In 2009, she was elected the First Female Foreign Associate of the French Academy in Humanities and Political Sciences. In 2013, she became a Meritus Doctor of the European Polytechnic University of Bulgaria, for her endeavours regarding Bulgaria’s and South-eastern Europe’s path towards the EU. In the same year she was awarded the OSCE Medal for her contribution to the approach between NATO and Russia at the Corfu Summit, during her chairmanship of the OSCE in 2009.
As a member of the Parliamentary Assembly of the Council of Europe she was President of the Committee of Political Affairs and Democracy from 2014 until 2016. She has been the Co-Rapporteur for the Russian Federation (Monitoring Committee). She served as Rapporteur for the functioning of democratic institutions in Poland (Monitoring Committee), while currently she serves as Rapporteur for the Syrian crisis (Political Committee).
Dora Bakoyannis is worldwide known for her adamant stance against terrorism.