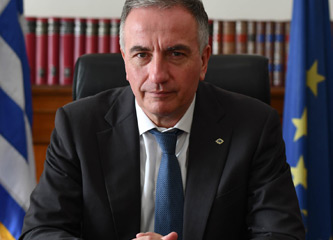 He was born in Thessaloniki in 1965. He’s an Attorney at Law. He studied Law at Aristotle University of Thessaloniki and continued his education receiving an MA in International Studies from the same institution in 1991. In 1994, he took a second MA from the University of Maryland, USA, in Sports Management. He worked as a Communications Manager for “Macedonia”, one of the most popular newspapers in Greece.   He was a Management and Communications Consultant of the soccer team PAOK.  He’s married to Vicky Moisiadou with whom he has a daughter and a son.