Minister of Infrastructure and Transport of the Hellenic Republic 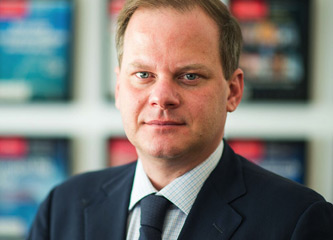 Minister of Infrastructure and Transport of the Hellenic Republic

Kostas Karamanlis was born in Athens in 1974.
He has studied History and Economics at Hamilton College and earned an MA in Law and Diplomacy from the Fletcher School of Tufts University.
In January 2015 Kostas Karamanalis was elected to parliament with the party of New Democracy, and was re-elected in September 2015 and in July 2019.
From January 2016 since June 2019 he was the shadow minister of the New Democracy Party for Infrastructure and Transport.
After the 2019 election, Mr Karamanlis was appointed Minister for Infrastructure and Transport in the Cabinet of Kyriakos Mitsotakis.
Before getting into politics, he worked from 2002 until 2004 in London for the UBS Warburg Bank. In 2004 he returned to Greece and started working as a chief executive at Mantinia
Shipping Company.
He is also a member of the Board of Directors of the “Konstantinos G. Karamanlis” Foundation and of the Board of Overseers of the Fletcher School.