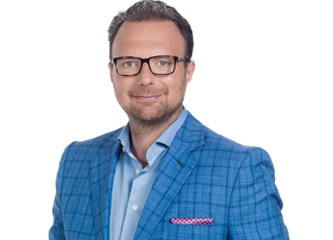 George brings significant international experience in financial services having worked in various capacities: investment banking, strategy consulting, private equity and general management. He joined Praxia as Chief Financial & Operating Officer in early 2018 and assumed the role of Deputy CEO towards the end of the year. He is also an Executive Member of the Board of Directors.

He holds a BSc in Chemical Engineering from the National Technical University of Athens and an MSc in Advanced Chemical Engineering and an MBA from Imperial College, London. He started his career as a Strategy Consultant at the Boston Consulting Group. He then moved to National Bank of Greece, where he spent 8 years with the Investment Banking and Private Equity/Venture Capital business units, originally in London (NBG International) and since 2009 in Athens, ultimately heading Mergers, Acquisitions, Restructurings and Equity Capital Markets.

He was subsequently appointed Deputy CEO of the Hellenic Financial Stability Fund (HFSF), the recapitalization vehicle for the Greek banks, with a firepower of c. €50bn, provided through the EU-IMF financial support mechanism to Greece. During his tenure, George was deeply involved in the reshaping, restructuring and stabilization of the Greek banking sector on the corporate governance front, he was actively providing guidance to the HFSF’s representatives at the BoDs and respective committees of the four Greek systemic banks. Prior to joining Praxia Bank, he was Partner in Deloitte Central Mediterranean, advising banks and corporates on strategy, finance and operations while being a key member of the Financial Services team that secured key mandates (the 5-year audit for 2 systemic banks, advisory for IFRS 9, NPL portfolio transactions etc.).