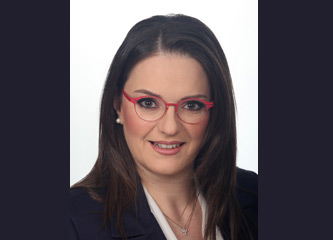 Kalliopi Kiriakidou was born in 1979 and grew up in Korissos, Kastoria.

She studied Civil Engineering at the Aristotle University of Thessaloniki (AUTh) and was awarded by the Technical Chamber of Greece for her performance. She holds a Master’s degree in Environmental Protection and Sustainable Development from the Faculty of Engineering AUTh and a Bachelor’s degree in Economics from the same University.

She works as a Civil Engineer and has been an employee of the Technical Works Department of the Regional Unit of Kastoria since 2009.

She was a representative in Western Macedonia’s Technical Chamber during the period 2016-2019 and a member of its Governing Committee until May 2018.

She served as President and Vice President of Western Macedonia’s Association of Engineers – Civil Servants – University Graduates (EMDYDAS) for the periods of 2010-2013 and 2008-2010, respectively, as well as a representative in the Panhellenic Federation of EMDYDAS since 2010.

She was a founding member of the Voluntary Scientific Team for the protection of Kastoria’s Lake and a member of the Management Board of Kastoria’s Municipal Enterprise for Water Supply and Sewerage, acting as a representative of the Technical Chamber of Greece.

She has full working proficiency in English, speaks Italian and Spanish fluently, and is competent in German language.

She is actively involved in cultural organizations and associations of the Regional Unit of Kastoria and was a track and field athlete of Korissos’ Gymnastics and Sports Association. She is married with Stelios Tsiagos, Physics teacher and is mother to one child.