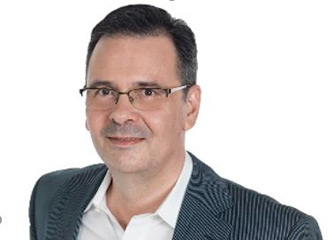 Alexandros started his banking career in 1992 at Salomon Brothers (later Citigroup) in London at the Infrastructure and Transportation Group. In 1999, he undertook investment banking in Greece and was engaged in the largest privatisations, equity offerings, IPOs and M&A. He became Managing Director in 2003. In 2005, he assumed responsibility for Citigroup’s investment banking in Greece, North Africa and Southeastern Europe.

In 2007, he assumed the position of Deputy Managing Director at Piraeus Bank. He was also a member of the Executive Committee and the Board of Directors. In 2012, he was appointed CEO of Geniki Bank, following its buyout by Piraeus Bank, tasked with returning the bank to profitability. In 2013, he returned to Piraeus Bank as an Advisor to the CEO where he spearheaded a number of transformational projects including the full review and rationalization of retail banking fees and commissions structure, the introduction of the first e-auction platform in order to increase efficiency and transparency of own real estate asset sales, and the creation of a strategic procurement unit in order to reduce drastically operating expenses without negative repercussions on the bank’s business. In 2019, Alexandros joined Praxia bank in the position of Chief Operating Officer. Today, Alexandros is the Chief Commercial Officer with responsibility for the corporate, retail and digital banking units.

Alexandros holds a Master’s in Advanced Mechanical Engineering from Imperial College of Science Technology & Medicine and an MBA from INSEAD.