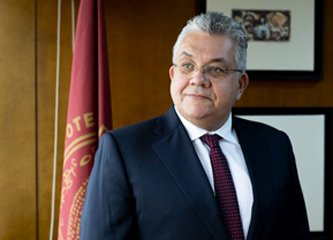 Nikolaos G. Papaioannou studied at the Veterinary School of the Aristotle University of Thessaloniki. Then he started the PhD thesis, which he supported in 1991.

In 1995 he was elected lecturer at the laboratory of Pathology of the Department of Veterinary Medicine. In 2012 he was elected professor of first grade.

From 2013 to today, he is the Director of the Laboratory of pathology, while from 2017 until 31st August 2019, Chairman of the Department of Veterinary Medicine and Deputy Dean of the School of Health Sciences.  From 1st  of  September 2019 he is the Rector of Aristotle University of Thessaloniki.

He has been trained in the laboratories of pathology of the veterinary schools of Zurich, Utrecht and Wisconsin of the United States of America.

His educational work is related to the subject of pathology, while his scientific-research work focuses on histopathological and immunohistopathological study of disease lesions with emphasis on neuropathology, particularly dealing with the study of the pathogenicity of cognitive dysfunction and tumor pathogenesis.

Prof. Papaioannou is a project coordinator in several Greek and international competitive research programs, as well as he has published numerous scientific publications in distinguished international scientific journals.