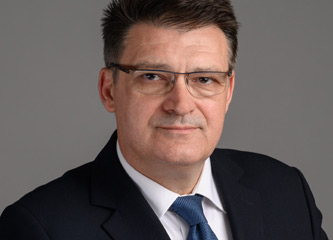 Dimitris Petrovits was born in Alexandroupoli, Evros. He graduated in 1980 from the 1st High School of Alexandroupolis and studied Journalism in Athens, where he graduated with a scholarship in 1984.

Alongside his studies, he worked as a trainee journalist at Athenian daily newspapers and served as Public Relations and Communication Consulting Agency affiliate. After his military service, he returned in Alexandroupoli and worked at the daily newspaper “EPARCHIAKOS TYPOS”. From 1988 to 2010 he was editor-in-chief at the daily newspaper “ELEFTHERI THRAKI”. From 1986 to 2010 he was also correspondent in Thrace for many Athenian newspapers (Eleftheros Typos, Apogeymatini, Ethnos, Kathimerini, Adesmeftos Typos, Eleftheros, Mesimvrini, 24 ORES, Epikairotita), the International News Agency Associated Press and the Athens – Macedonian News Agency. He worked in the Hellenic Radio in Orestiada and Komotini and was also a correspondent of the Hellenic Radio 2 the period 1992- 1998. He worked in ERTA TV in Alexandroupoli for ten years and then as News Director and moderator emissions policies in THRAKI NET TV also in Alexandroupoli. During 1991-2003 he oversaw the Press Office of Repatriated Foundation (EIYAPOE) for the region of Macedonia – Thrace based in Alexandroupoli. He is a member of the International Federation of Journalists (IFJ) In 2004, he received the Journalism Award from the Botsis Foundation for highlighting issues of Thrace and the contribution to the development of Press in the frontier of Greece. In the regional elections of 2014, he was elected Deputy Governor of the Regional Unit of Evros of the Eastern Macedonia and Thrace Region. He is member of the European Committee of the Regions (CoR) since 2012, Chairman of the Financial Committee of the Eastern Macedonia and Thrace Region since 2014, member of the Board of Directors of the Association of Greek Regions since 2019.