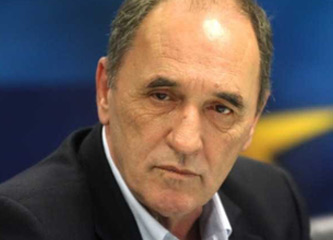 George Stathakis is a Professor of Political Economy at the University of Crete. He served as Head of the Economics Department and as Vice-Rector of the University.

He studied Economics at the Universities of Athens and Newcastle (M.A, Ph.D).  He was a visiting scholar at the Centre of European Studies, Harvard University and at the Centre for Byzantine and Modern Greek Studies, City University of New York.

He entered politics in 2012 and was elected as MP for SYRIZA in Chania-Crete in the parliamentary elections of 2012 and 2015. He served as Minister of Economy and Development (January 2015-October 2016) and as Minister of Environment and Energy (October 2016-June 2019).