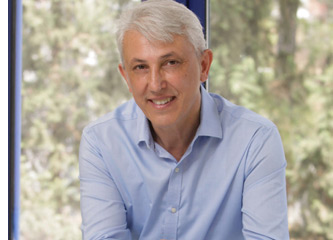 Dr. Panos Vlachos was appointed to the role of 11th President of Anatolia College in May 2013.  In this capacity, he serves as the lead administrator of Anatolia’s four educational divisions: Anatolia Elementary School, Anatolia High School, the Pinewood-American International School and the American College of Thessaloniki (ACT). He is currently also serving as the Vice President of the Association of American International Colleges and Universities.

Prior to his appointment as President of Anatolia, he served in a variety administrative    leadership positions at ACT over the past 15 years: Vlachos has worked as a Professor for over 20 years teaching at the graduate and undergraduate level. His teaching and research interests are in the areas of Applied Mathematics & Statistics and the application of information and communication technologies in teaching and learning approaches. His academic research has been published in various academic journals. He holds a B.S. in Mathematics from the Aristotle University of Thessaloniki, an MSc in Mathematics and a Ph.D. in Applied Mathematical Sciences from the University of Rhode Island in the USA.