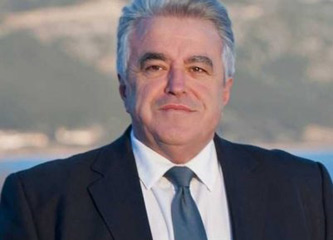 Dr. Dimitrios Dimitriou was born on June 2, 1964, in Ioannina. He lived in Ioannina until the age of 3 when his parents decided to go to Frankfurt as a family. The children returned in the summer of 1973 to acquire Greek education. He studied at the Zosimea School of Ioannina.

In 1993 he opened a private laboratory for analysis and food, together with partners. In 1997 he became a major shareholder and manager of the company “Bioanalysis of Scientific Laboratories”, which he maintains to date, dealing with quality analyses and studies. He is a certified inspector of the IRCA and a member of EFET’s Register of Trainers.

From 1998 until today, he was elected to the Administrative Council of the Chamber of Ioannina. Indeed, in 2006, for one year, he was General Secretary of the Chamber, while from December 2011 to 2014 he held the status of President. He was also President of the Association of Parents and Guardians of the 12nd Primary School of Ioannina, for three years. He was President of the Football Club “Elpida” of Ioannina. He is a member of scientific companies, with publications in foreign and Greek journals and key speaker at Greek and international conferences. He speaks Greek and English.

He has a rich teaching work in public and private organisations, with central themes in: “Physiology and reproduction of trout”, “Sickness and prevention in trout cultivation”, Aquaculture and Environmental Management, etc.

He is a member of various scientific societies (Hellenic Society for Biological Sciences, Society for Intestinal Microbial Ecology and Diseases, Hellenic Microbiological Society, Hellenic Society of Medical Informatics) and has participated in many National and International Conferences and Publications in International and Greek Scientific Journals.

Since 1995 he has been a member of the GeoTechnical Chamber of Greece in the fish sector with registration number 500344 and holds Class A’ type 26 & 27 Scholar Degrees, carrying out numerous fish and environmental studies.

At the same time, through his continuous training, he has the acquired certifications as:

In 1993 he participated as a founding member in the company “Bioanalysis Civil Society” and from 1997 until today he is the main shareholder and legal representative and he is the General Manager and Quality Manager of the company “bioanalysis Scientific Laboratories M.I.K.E.”. In 2006-2007 he served as Secretary-General of the Chamber of Ioannina, while in 2011-2014 he was President and from 2019 until today he is still President of the Chamber of Ioannina.