Former Alternate Minister for Energy and Environment of Greece 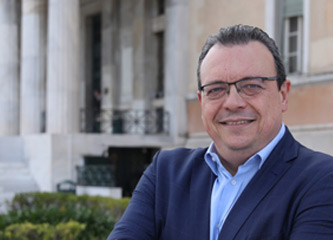 Former Alternate Minister for Energy and Environment of Greece

Mr Famellos was born in Athens in 1966 and raised in Thessaloniki. He holds a Diploma in Chemical Engineering from the Aristotle University of Thessaloniki and an MSc in Environmental Planning from the Hellenic Open University. As Chemical Engineer, Mr. Famellos has extensive experience in the fields of Environmental Engineering, Water Resources management, Recycling, Solid and Liquid Waste Management. He has been member of the Board of the Technical Chamber of Greece from 1997 till 2015, and member of the National Delegation of the Technical Chamber of Greece from 2003 till 2015.

He was first elected as Member of the Parliament with SYRIZA in January 2015, and re-elected in September 2015 and July 2019. He was appointed as Parliamentary Representative of SYRIZA in October 2015, and as Chairman of the Inquiry Commission of the Parliament in April 2016, which was aimed at investigating the legality of the bank loans given to Political Parties and Mass Media owners. From November 2016 to July 2019 he served as Alternate Minister for Environment and Energy of Greece. Today he is responsible for coordinating Energy and Environmental Policies within the SYRIZA party.