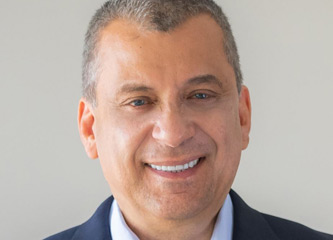 Byron Nicolaides is the founder and CEO of PeopleCert, the global leader in the certification of professional and language skills. He is also the President of the Council of European Professional Informatics Societies (CEPIS) representing 500,000 IT professionals in 28 EU countries.

Byron is a self-made entrepreneur, having started various businesses and worked as International Vice President for Merrill Lynch (1987-1992). Over the last 30 years, he has been consistently recognised as a pioneering figure in the transformation of the global examination delivery and certification industry, using groundbreaking technology to bridge the digital gap and bring education to people around the world. In 2019, Byron won the title of the Entrepreneur of the Year, at the European Business Awards, representing the United Kingdom, putting PeopleCert in the elite group of Europe’s top 1% most successful companies (from a list of 120.000 enterprises). In the same year, he won the title of Self-Made Entrepreneur of the Year by Ernst & Young, another distinction for his overall business accomplishments & social contribution.

He is a Board Member of the ICDL Foundation, fellow of the British Computer Society (BCS) and member on many Boards and Advisory Committees. With a steady stream of achievements both personally and professionally, Byron has remained true to the four integral values that guide everything he does: quality, innovation passion, and integrity. He holds a BA in Business Administration from Bosphorus University and an MBA from University of La Verne. He speaks English, Greek, Turkish and French.

With a steady stream of achievements both personally and professionally, Byron Nicolaides has remained true to the four integral values that guide everything he does: quality, innovation passion, and integrity.