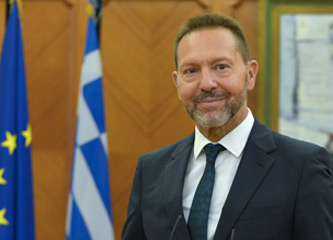 Born in Athens December 10th, 1956. He is Professor of Economics at the Department of Economics, University of Athens, which he joined in 1989.
He graduated from the Department of Economics, University of Athens in 1978. He obtained his post-graduate degrees (MPhil 1980, DPhil 1982) from Oxford University, where he also worked from 1982 to 1986 as a Research Fellow and Lecturer at St. Catherine’s College and as Research Fellow at the Oxford Institute for Energy Studies. Following his return to Greece he worked as a Special Advisor to the Ministry of Economy and Finance (1986-1989) on Public Enterprises and Incomes Policy issues, and to the Bank of Greece (1989-1994) on Monetary Policy issues.
From 1994 to July 2000 he was Chairman of the Council of Economic Advisors at the Ministry of Economy and Finance. In this capacity, he participated in the negotiations for the entry of Greece in the Economic and Monetary Union.
He was Vice Chairman of the Public Gas Corporation (1994-1997) and a member of the Board of Directors of the Public Debt Management Office (1998-July 2000). From 2000 to 2004 he was Chairman and Chief Executive Officer of Emporiki Bank and Vice Chairman of the Association of Greek Banks. From 2005 to August 2008 he was managing director of Kappa Securities.
He served as Director General of the Foundation for Economic and Industrial Research (IOBE), a private sector think-tank (September 2009-June 2012). He was Minister of Development, Competitiveness and Shipping of the Interim Government (May-June 2012). He was Minister of Finance from July 2012 until June 2014.
Since June 2014 he is Governor of the Bank of Greece.